Waterloo Secondary School Astronomy Club was founded in September 2005. Dr. Bruno Mitchell of Port of Spain donated our first telescope, a 10 inch reflector telescope. This club has grown leaps and bound bringing awareness of astronomy from a practical approach. In 2010, our club won a National Astronomy competition at UWI.; but our main focus is bringing this field ‘ASTRONOMY ‘ to the students ,families and communities around our school and beyond.

Although our club is run by the school’s Form 6 students its open to all. Our current Club President is Nadine Ballack and teachers in charged of Club are Mr. Jerome Ramdahin and Mr. Denzil Noel. Night’s viewing are done at least once per term. Please feel free to check out our facebook page [Waterloo Secondary School Astronomy Club]

Some Members of our club.

This year’s Astro Quiz seems to be a pretty competitive one but with the robust team and their attitude towards Astronomy and the basics of it, I think that this year could be our first win in 10 years. Carissa Deonarine, Renee Persad, Zoe Seeraj, Aaliyah Kalicharan and Aaron Mohammed of the upper 6, Jamie Gonzales of lower 6 and Kedafah Showers and Dernel Hinds of form 5 are the representing team members, lead by Jerome Ramdahin for 2020 Astro Quiz. On October 24th 2020, TTAC, the host of the event held its annual Pre-Quiz with Waterloo Secondary School conquering this title. On November 28th, the authentic competition will take place virtually using the zoom platform. This year, it is anticipated that Waterloo Secondary School makes all of its supporters a gratified crowd with continuing to be victorious but most importantly just have fun. 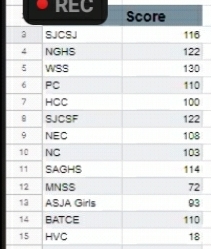 The WSS Astronomy and Meteorological Club had placed first in the pre-quiz segment of the 2020 Astro Quiz.

On Saturday 28th November 2020, they competed in the finals of the 2020 National Astro Quiz and won.

The members of the Astro team: 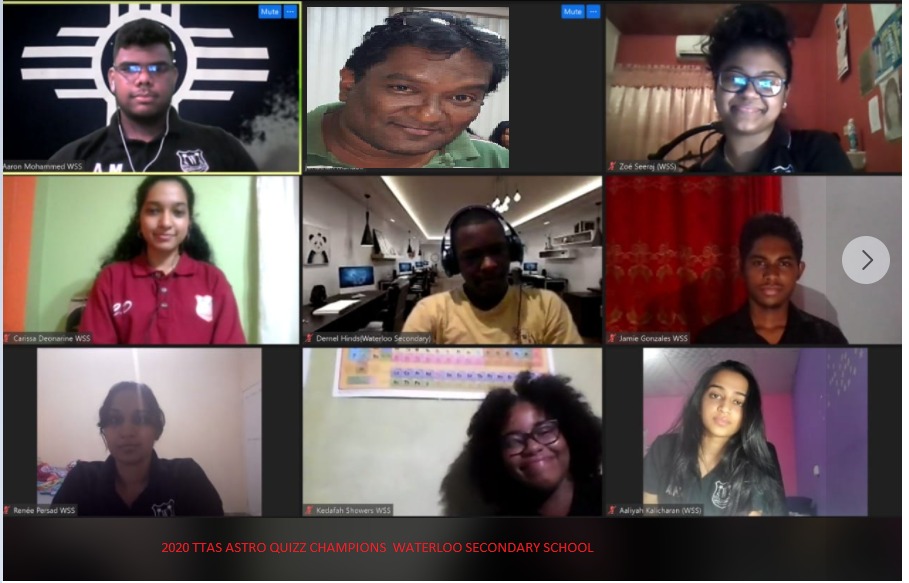 
On 20th November , 2021 WSSAMC successfully defended its title of champion of Trinidad and Tobago Astronomy Club Astro quiz ; we are now three times champions 2010, 2020 and 2021. Our team :

Our team led by President Jamie Gonzales got 69/70 of the quiz’s questions correct, an unprecedented performance. This team has a combination of form 4’s , form 5’s and form 6’s and at the same time our WSSAMC has kids from all form levels; this shows a continual interest and dedication to this club.
This club , which was created in 2004/2005 by Mr. Jerome Ramdahin and Mr. Denzil Noel and with a 10” reflecting telescope donated by Dr. Bruno Mitchel [Opthalmologist] has indeed grown leaps and bound. We have included a meteorological section and currently setting up a weather station [wifi] . and in process of joining GLOBE project[
Global Learning and Observation to Benefit the Environment
Our club was asked to join The Growing Beyond Earth , GBE, run by Fairchild Botanic Garden of Florida in conjunction with NASA in September 2021. Another government school Brazil Secondary School is also doing GBE program. In this project we acquired an exact replica of a hydroponic system [veggie] used on International Space Station [ ISS] ; special thanks To Mr. Vishnu Ramsook who helped us to purchase this unit.
We just finished part one of project ie. To grow radish seeds under our conditions here in Trinidad and Tobago and record all observations for NASA.


On 18th February ,2020 WSSAMC name was on NASA’s Mars rover ,
Perseverance,
having included our name after NASA asked worldwide for anyone to include their name on it.